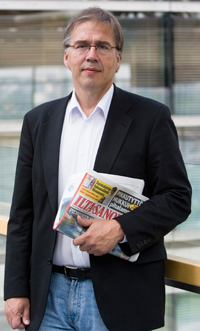 "With a Publisher, we will be better equipped to respond fast and acutely to changes in our operating environment," says Pekka Soini, acting President of Sanoma News, explaining the appointment.

"Through this arrangement, Mr Harju's experience and competence will be available for Ilta-Sanomat in future," Soini explains.

The Ilta-Sanomat cluster contains the Ilta-Sanomat newspaper, the Iltasanomat.fi online service, the TV-lehti magazine, the Veikkaaja betting weekly, and the daily theme sections.

Mr Sadeoja says he is getting an excellent start to his task as Publisher. Ilta-Sanomat has seen a rapid increase in its market share, the new theme magazines have been a success, and the newspaper is making a sound profit.

"Ilta-Sanomat is in the middle of the most intensive development period in its history. It's inspiring and stunning to stand at the helm in these times. The development activities are rationalised now that one person is in charge of both content and business issues," says Sadeoja.

Ilta-Sanomat belongs to Sanoma Group's Sanoma News Division. Sanoma News is the leading newspaper publisher in Finland, and its products in both print and digital format have a strong presence in the lives of their readers.