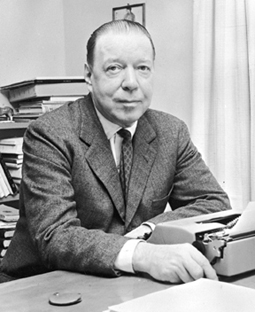 On 19th September it has taken 100 years from Mika Waltari's birth. Waltari was a great Finnish storyteller, author and dramatist. His life and production will be celebrated the whole year and it's for excellent reasons; Waltari wrote such an extensive wide and versatile production that it's hard to beat in Finnish literature history. His production has been translated into many languages and it has also been directed into movies.

From a child to a author

Mika Toimi Waltari was born in Helsinki on 19th September 1908. He first studied theology in University of Helsinki but he switched his major to practical philosophy and aesthetics in the end. Waltari got married with Marjatta Luukkonen in 1931 and daughter Satu was born the next year. Before his carrier as author Waltari worked among other things as book reviewer in newspaper Maaseudun tulevaisuus, as subeditor in weekly magazine Suomen Kuvalehti and as written assistant in Finnish broadcasting company. From 1938 Waltari was full-time writer.

In November 2005 The Egyptian celebrated its 60 years of publication and Päivälehti museum organised a jubilee exhibition that widely presented the time The Egyptian was created and the way it conquered the world.

"Waltari wrote The Egyptian which is almost thousand pages long in the Kallo mansion in Hartola during one spring and summer. His writing tempo was furious because the novel was finished in less than four months," Päivi Lehtovirta, the producer of Päivälehti museum explains. She was also actively involved with the jubilee exhibition of The Egyptian in 2005.

"When the novel was finished, Maila Talvio, WSOY's oldest and most respected author, invited Waltari to read pieces of his new major work to a written evening entertainment. Talvio was horrified with the considerable amount of eroticism in the book and she asked the publisher not to publish Waltari's immoral novel. Talvio even promised her whole property as compensation for the expenses that the novel wouldn't be published. However, The Egyptian was the already then in press, and therefore WSOY's board of directors decided to continue with the publishing process. Talvio's opinion still had significance because WSOY didn't dare to advertise the novel in newspapers before the most important newspapers in Helsinki had given their great reviews of the novel," Lehtovirta continues.

Waltari died in Helsinki the 26th August 1979, and he has been buried on the artist hill in Hietaniemi's cemetery in Helsinki.

Now when 100 years have passed from Waltari's birth, WSOY publishes many reprints of his production. The year also contains many events concerning Waltari's life and production.

Text is based on different texts on Waltari's life.