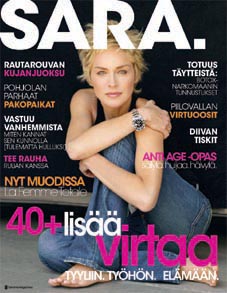 Finland's magazine market is set to get a dynamic new player in October this year when Sanoma Magazines Finland launches Sara, a title designed for women in the 40+ age range. To be published monthly, Sara is aiming at a circulation in the order of 70,000 in its first three years of publication.

"Sara is designed to challenge women in their 40s and above, mentally and physically. We're aiming for a visually exciting and entertaining publication that will encourage women to get the most out of their lives," says Kristiina Dragon, who has been appointed Editor-in-Chief.

"By building our concept around this 'untapped resource', we believe we can produce something that will genuinely excite readers. The number of women in this age category is impressive in itself. Women between 40 and 60 number some 780,000 in Finland, and 80% of them are working women, says Anne Koski, Sanoma Magazines Finland's Publishing Director, Women's and Family Magazines."

"Sara will dare to be different. In addition to exciting visuals, we're aiming to really get to grips with the subjects we cover and provide our readers with a meaningful read in an attractive package. As well as strong lifestyle, fashion, beauty, and home decoration content, we'll also be focusing on health, both mental and physical, as well as the arts and contemporary issues of the day," says Kristiina Dragon.

Well-known as a highly talented journalist, Kristiina Dragon (49) received the SanomaWSOY Award this spring for her previous, highly successful magazine launch, the family title, Meidän Perhe. She worked for a long time as Managing Editor and Operating Editor-in-Chief of Gloria, and most recently as Project Manager and Producer of women's title, Kodin Kuvalehti.

The first issue of Sara will appear on October 25, and will have a print run of 110,000. The target is to achieve a 30% coverage of the target reader market.