Day as a journalist project for high school students, test editorial office Piste, yearly newspaper week at schools, media studies, and traineeships - Sanoma's cooperation with schools and polytechnics includes various activities. The aim is to introduce the world of newspaper to young readers.

- When students get to know how newspapers are made, they form a strong relationship with it. Cooperation with schools is also efficient marketing, describes News Editor Marja-Riika Saaristo who is responsible for different types of youth projects within Sanoma. The most significant part of the cooperation is "Day as a journalist" project, where second year high schools studenst get to know the journalistic work by making one page for the daily newspaper Helsingin Sanomat. This autumn the project is organised for 11th time in connection with Helsinki Book Fair 2005. 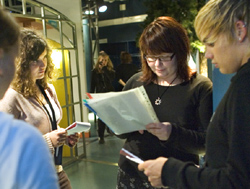 A survey made among the students who had participated the project shows, that some 40% work with communications later on in their lives and some 15% as newspaper journalists. - The aim of all our student and youth projects is to inspire ideas through participation in making of the newspaper, Saaristo says.

In addition to Day as a journalist, the other school project also visible on the pages of Helsingin Sanomat is the newspaper week held in February. During the week, articles marked with the logo "find your own story" try to catch the interest of students to focus on subjects close to their lives.

During the newspaper week, schools can also order newspapers for free and journalists visit schools introducing newspaper and its creation process. In 2005, Helsingin Sanomat's journalists made 40 school visits during the week.

Students are also invited to Sanoma House to participate in different courses. Last winter some 20 classes got to know the photographer's life. In 2006, classes can take a course in newspaper making from scratch.

In the test editorial office Piste in Sanoma House, Helsingin Sanomat's and Ilta-Sanomat's journalists guide classes into the world of newspapers. The pupils are exited to learn from a real journalist's experience. According to Saaristo, it is really important that journalists are guiding groups instead of PR-people.

Local newspaper Etelä-Saimaa has been innovating new forms of cooperation with South Carelia Polytecnic. The second year students in Business Administration do their two months traineeship in Etelä-Saimaa. The cooperation has generated surveys on e.g. bonus card, newspaper revamp, as well as different order campaigns for stores and schools.

Circulation Manager Lasse Lyyra emphasises pre-planning and clear rules of cooperation. Each student has made a written agreement on the traineeship. The students are paid on hourly basis and they get a bonus from the subscriptions they have sold. - I've asked the students to be critical and to make questions. They have taken this piece of advice seriously, Lyyra says with satisfaction.

The Head Teacher Pertti Mela from South Carelia Polytecnic finds it important to teach students also outside class rooms. - The cooperation gives students an opportunity to practise real marketing skills, to learn team work, to get good contacts, and to grow with responsibilities, Mela lists.

The local newspapers Kouvolan Sanomat and Kymen Sanomat have a joint person in charge of the link between schools and papers. Tiina Eskelinen's day includes media and communications lectures at comprehensive schools, high schools and polytechnics. She also produces material on how to use newspaper for teachers and plans and realises different kinds of competitions.

- For youngest students, I tell about the life cycle of newspapers. From the third grade onwards, newspapers are introduced via the structure. In the fifth grade, we consider how the news end up in the newspaper and what is a piece of information worth of putting in the paper. The older students spend an hour as journalists thinking how the news in the newspaper has been born. They also learn media literacy and media critics, says Eskelinen.

Newspapers Kouvolan Sanomat and Kymen Sanomat have had a person working as a link between schools and papers for five years. Newspaper Etelä-Saimaa also got its own person in spring 2005. The structure of her work is similar to Tiina Eskelinen's.

- The school link work is new for us, so we have emphasised marketing so far, Marjukka Hietalahti, school link at Etelä-Saimaa, says. - We are organising an evening event for teachers on newspaper education. We hope that after the event, we can name teachers who are interested in cooperation in developing media studies further.