Schoolbooks adapt to the changes of the scholastic world

Finnish schools and the book publisher WSOY have a long history together. Finnish government's decisions have played an important role in the development of educational materials thrughout the years. Finnish school system has changed many times and this has required changes also in schoolbooks.

- The most important event in history from the schoolbook publisher's point of view has been the new comprehensive school system in 70's, says product manager Juha Ala-Hiiro from WSOY.

- The latest news about Finland's excellent results in the latest international comparisons are really important also in a sense that in Finland the common school issue was ordered later than in other Nordic coutries, Ala-Hiiro says.

Schoolbooks have followed their time in layout as well as in their shape and content. Recently educational materials have been reshaped in electronic format as internet and other electronic media have become more common. - I see that electronic educational materials will become more common beside the books, Ala-Hiiro says. - A book is still very competitive - it is easy to use and it contains a carefully selected amount of audited content.

From Turku Academy to top schools in the world

1640 Turku Academy, Finland's first university was founded. After Turku fire (1827) the university was moved to Helsinki and was named University of Alexander.

1919 Matriculation examination was moved from university to schools.

1921 Compulsory education law. Finland was decades behind other Nordic countries even though the parliament has discussed about the subject from 1890's.

1945 Numerus clausus was founded in order to limit the access to universities.

1968 Comprehensive school law. In the same year the first publications of 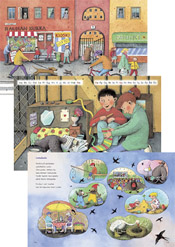 schoolbooks were published. Comprehensive school system started from Lapland in 1972 and in Helsinki metropolitan area in 1977.

2004 First results from the PISA study of 40 countries ranked Finland the best in the maths, reading and science tests.