Benefiting from the brand

Sanoma Magazines is among the European top-five publishers of consumer magazines with its portfolio of some 230 titles. However, increasing amount of the Division's revenues comes from line and brand extension of these magazines.

The Dutch-based Sanoma Uitgevers' is the best example of benefiting from its well-known brands: some 10% of the sales are accumulated from line and brand extensions, like linen, stationery, kitchen equipment or events. 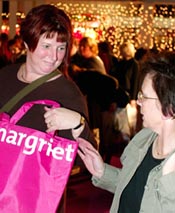 Margriet as well as in home interest magazines. As part of sharing best practices across the Division, also other businesses are beginning to better exploit their popular brands.

A product presented in Libelle is almost surely a success

The 70 years old Libelle, the leading Dutch women's magazine and the magazine with the highest circulation within the SanomaWSOY Group - some 580,000 copies - is a prime example of the ability of the Dutch to build new and successful business around a traditional magazine.

As an example, Editor-in-Chief Franska Stuy describes Libelle outdoor event, Zomerweek. - Organised already for the eighth time, this weeklong summer happening has grown into a real mega-event. Each year, we have more than 70,000 visitors and the Dutch Railways organise a special flag stop for people attending the festival, she tells proudly.

Zomerweek offers its readers a day of life in Libelle style. - Every year has a special theme, Stuy explains. In addition to some 350 cooperation partners, readers meet Libelle's editorial staff. The Event is not unique: Among others, Margriet has a Winterfair for some 70,000 visitors and youth magazine Tina takes its readers, some 12,000 girls between 10 and 14 years, to amusement park once a year.

VT Wonen - more than a magazine

Sanoma Uitgevers' home interest magazine VT Wonen is the leading monthly interior magazine in the Netherlands. It helps its readers to know what atmospheres, materials, colours, forms and emotions are of interest at the moment and inspires them to think the future of their homes.

With a circulation of 150,000, VT Wonen reaches over 750,000 readers each month. The strong brand of VT Wonen is also able to step over the border of the paper.

The brand can be found on paint buckets, vinyl floors, window decorations, kitchens or lighting, linen, glassware... the VT Wonen Home Deco collection has over 600 products and is sold in the biggest department stores and interior shops in the Netherlands.

VT Wonen also publishes theme issues. In addition, books are published once or twice a year. The popular books are also translated and sold in England, Sweden, and Denmark among others.

Together with other Sanoma Uitgevers' interior and garden magazines, VT Wonen participates in an interior fair De Woonbeurs.

Editor-In-Chief of VT Wonen Makkie Mulder explains that the first thing in choosing a brand extension partner are the common values. - Brand's value must increase with the extension, but we must also be able to add something to the product. The partner must have a high quality product with a wide distribution network. Usually our partners are also our advertisers, Mulder explains.

A brand extension offers both the reader and the advertiser more than just a magazine. VT Wonen's readers want the feeling of the magazine also in their home. - They write to us: we have a great house, we have nice furniture, but we cannot get it like you do. We want your styling, your atmosphere, your colours, Mulder tells.

- We are the helping hand; we ease our readers' life by helping them to decorate. Our readers trust us and that is why we only can work with partners we can trust - we cannot afford their products to harm our brand.

Magazine brands ability to travel to other mediums or products is based on the relationship with its readers. Sanoma Magazines creates communities around our magazines brands, also outside the Netherlands. In Finland for example, Hifi magazine's fair with the theme Image and Sound or women's magazine Gloria's events have been success stories and thousands of people discuss on the web community of Vauva (Baby) magazine.